How to use Dynamic File and Directory Configuration for Receivers? Print

When a Scenario is run, the generated output will be in a single file that contains every record for most configured Receivers. The Dynamic File and Directory Configuration feature allows you to customize the following for select Receivers: 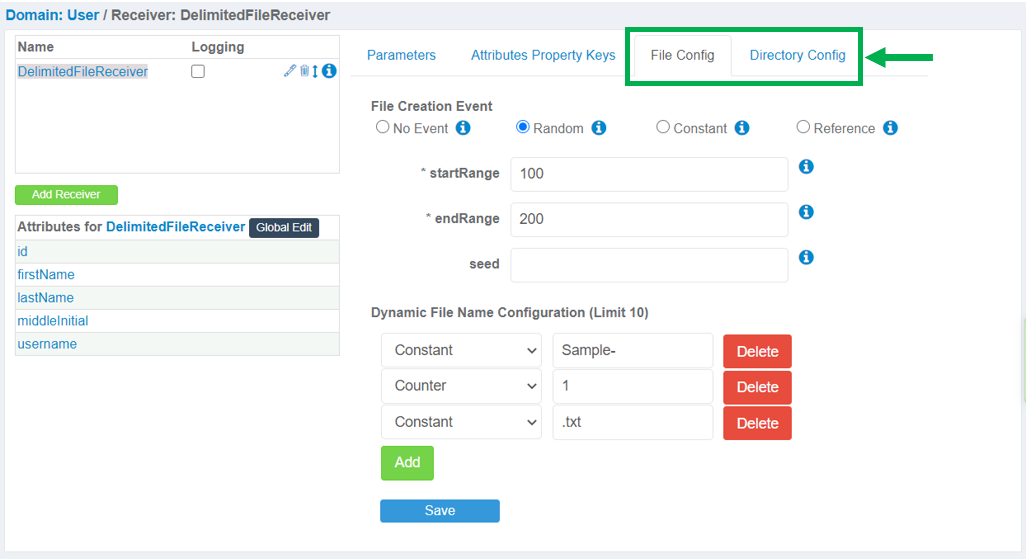 What are the File and Directory Configuration Tabs?

Apart from that, you can also configure the naming of your output file and output sub-directory.

When should you use the File and Directory Configuration Tabs?

How do you use the File and Directory Configuration Tabs?

What Receivers have this Feature?

This feature has not been implemented for all Receivers at this time. The following Receivers currently have this functionality:

The File and Directory Config Tabs are used to configure what event will trigger file/directory creation and the naming configuration for generated files/directories. Four options are provided for the creation event:

The image below shows a Random Dynamic File Configuration: 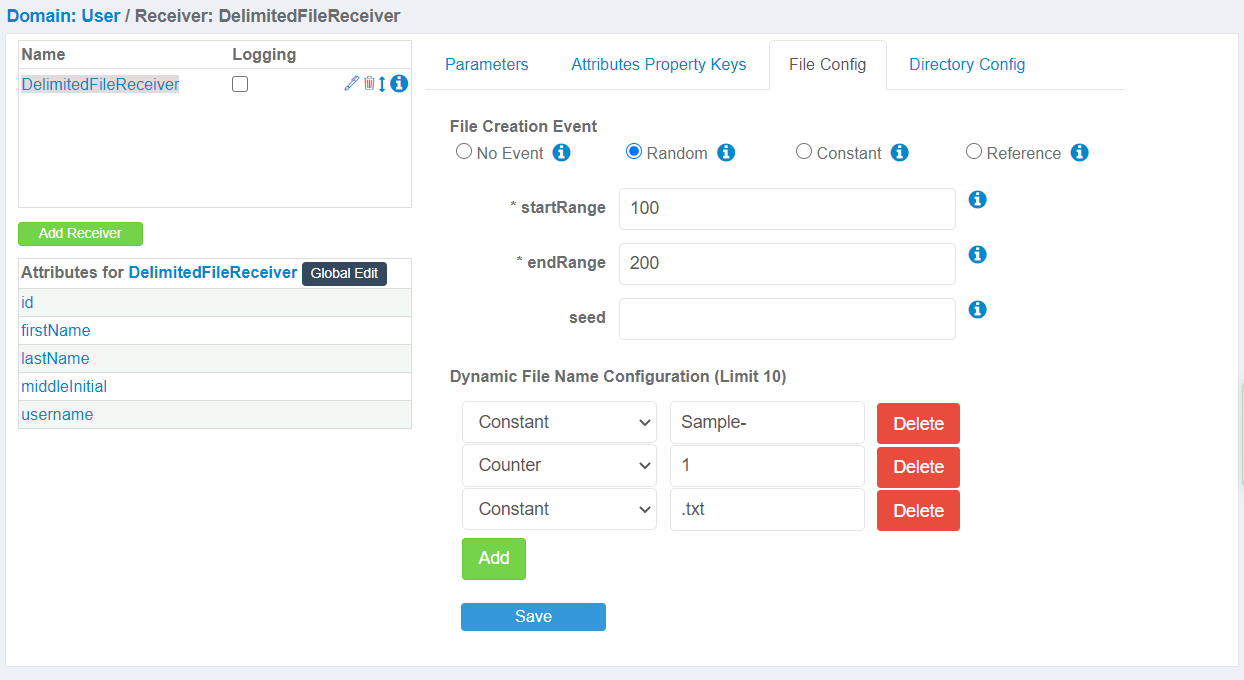 File and Directory Names can have up to 10 items within the configuration. The following options are provided for each configuration line: 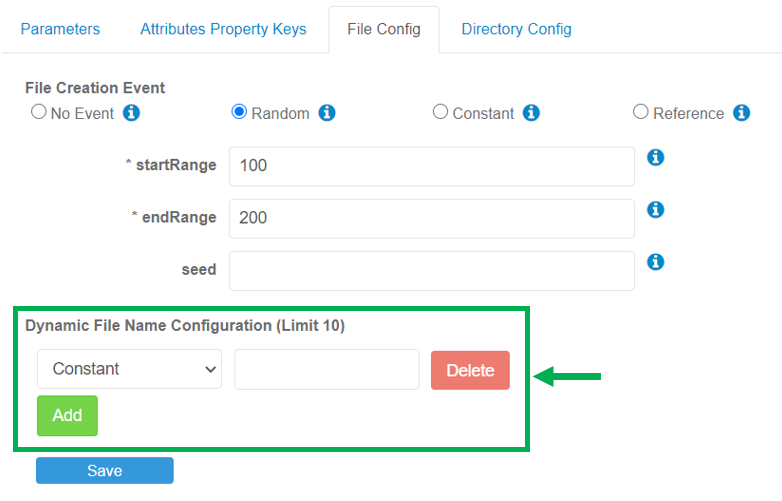 Important: The final configuration line for files must be the File Extension. The example below is .txt because delimited files are being created. 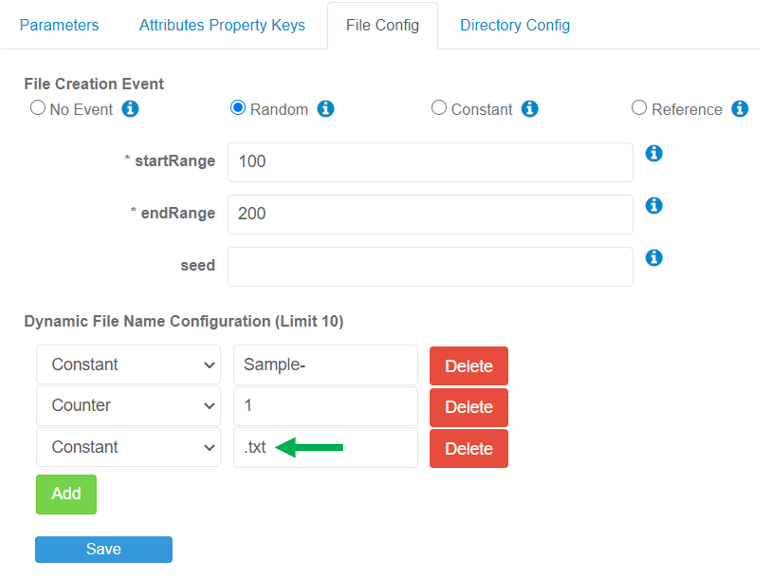 For each of the examples in this section, the loopCount for a User Domain has been set to 10,000 records. 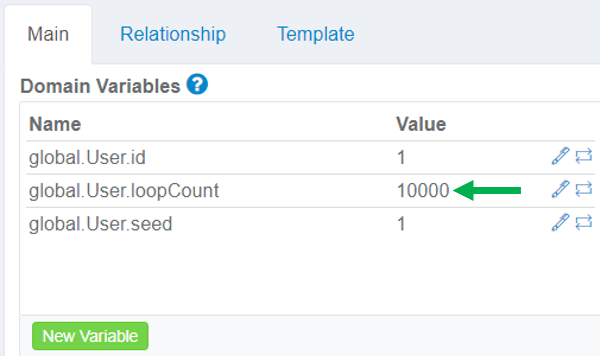 The DelimitedFileReceiver will be used for all provided examples.

In this example, the Random radio button has been selected. The range is between 100 and 200 records, meaning each file will have a number of records between this set number range. 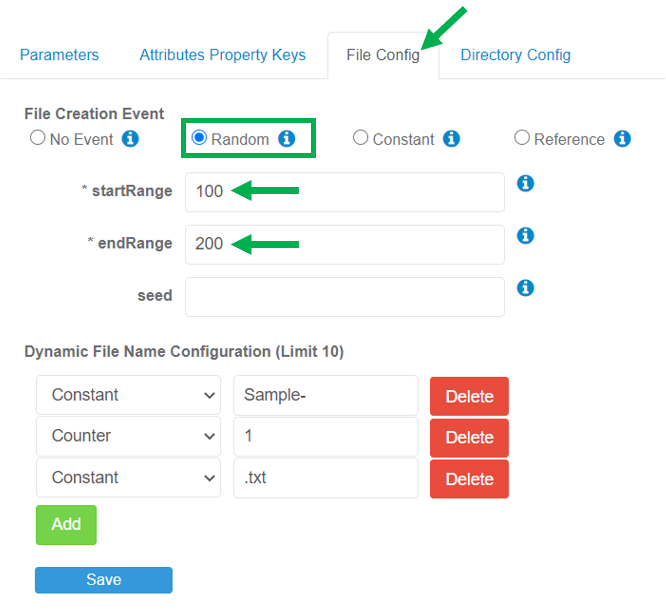 The Constant radio button has been selected for the directory configuration in this example. Each File Directory will contain 10 files and be named accordingly: Users-1, Users-2, Users-3,...., Users-9, and Users-10. 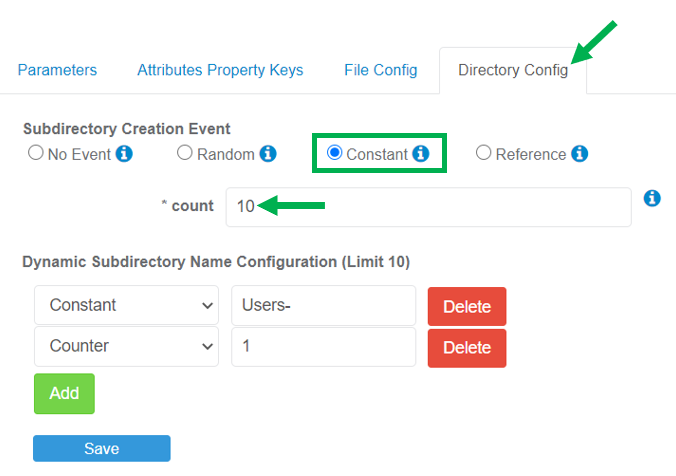 Sample-1.txt contains 149 records. Each file will have somewhere between 100 and 200 records according to the startRange and endRange Parameters within the file configuration.

The last directory (Users-7) will hold the remaining files, which is 9 files in this example.

In this example, the Constant radio button has been selected for the file configuration, and a value of 200 has been entered. Each time the count reaches the defined value, it triggers the creation event and afterward starts the counter again. 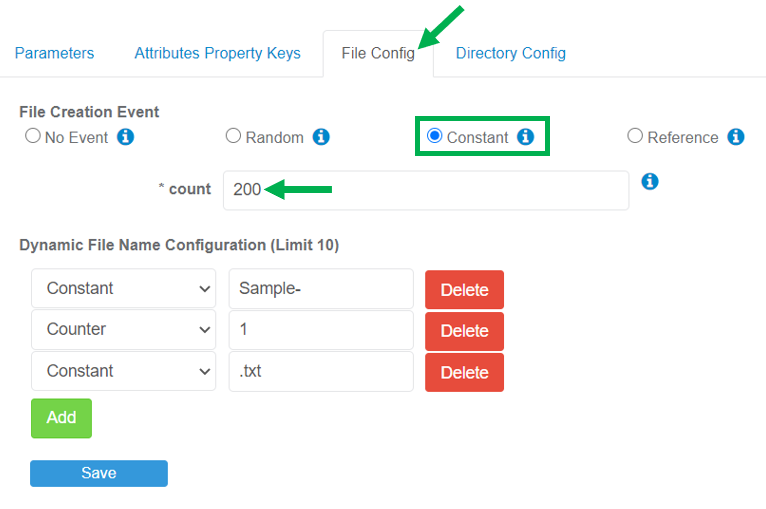 The Random radio button has been selected for the directory configuration. The range has been configured to be between 5 and 10 directories. 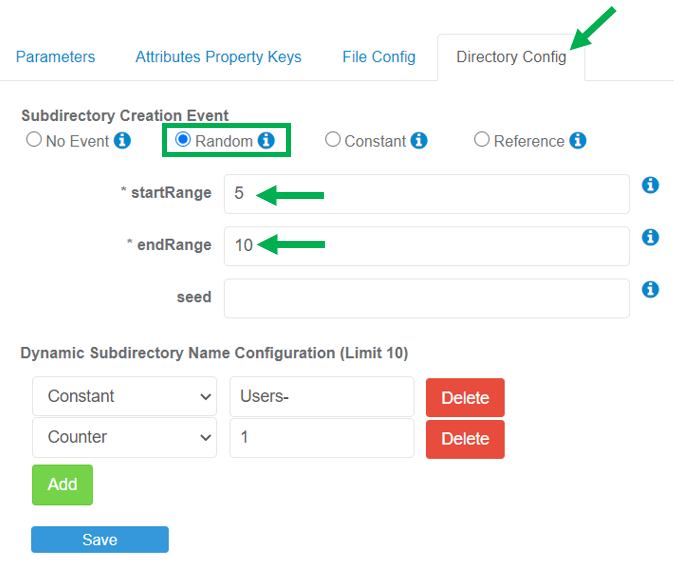 For this example, 8 file directories were created and contain a total of 50 files.

The Users-8 directory contains 2 files. The last directory will contain the remaining or leftover files.

Each file contains 200 records, and the last file will contain the remaining record count. Sample-1.txt is shown below: 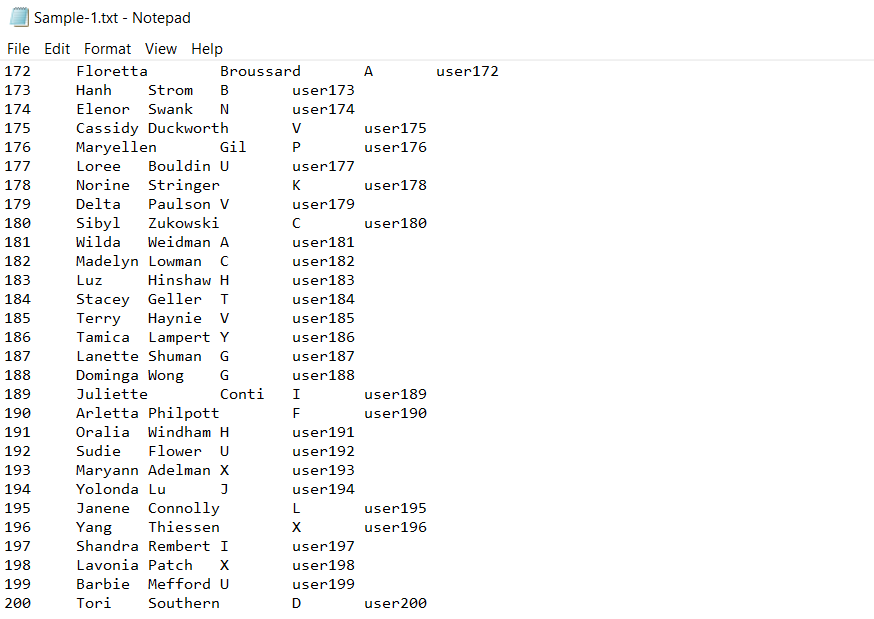 In this example, the Reference radio button has been selected. It will reference a Boolean Attribute titled "booleanValue". With this option, the file creation event will be triggered when a record has a "True" value. 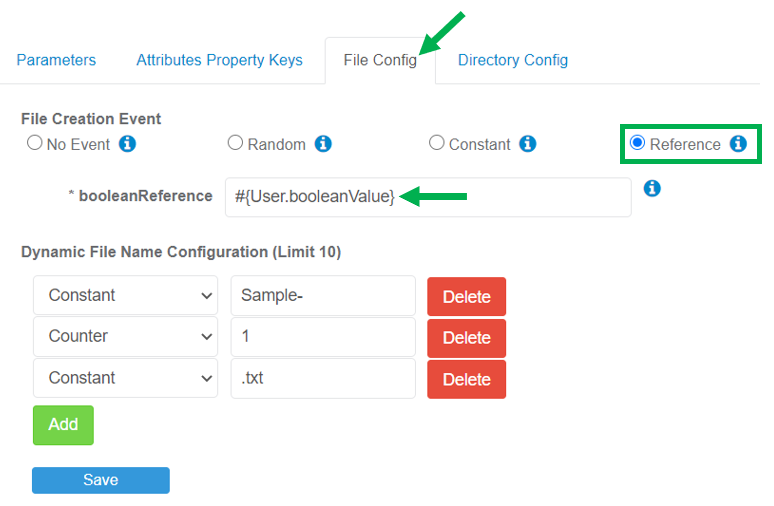 The Constant radio button has been selected for the directory configuration. A new directory will be created for every 200 files. 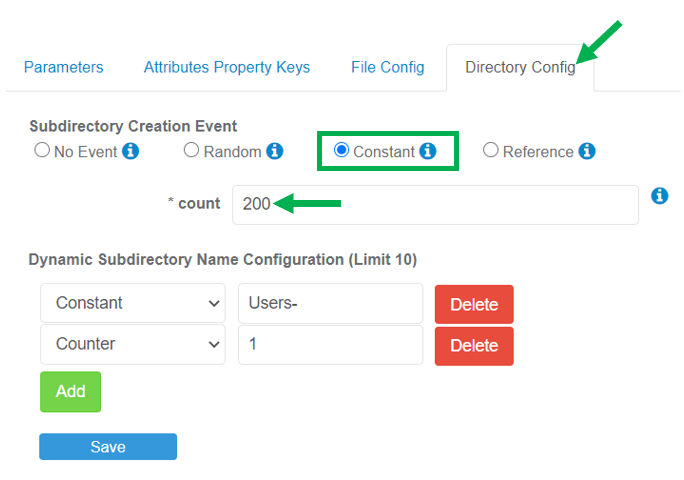 In this example, 25 Users directories are created. 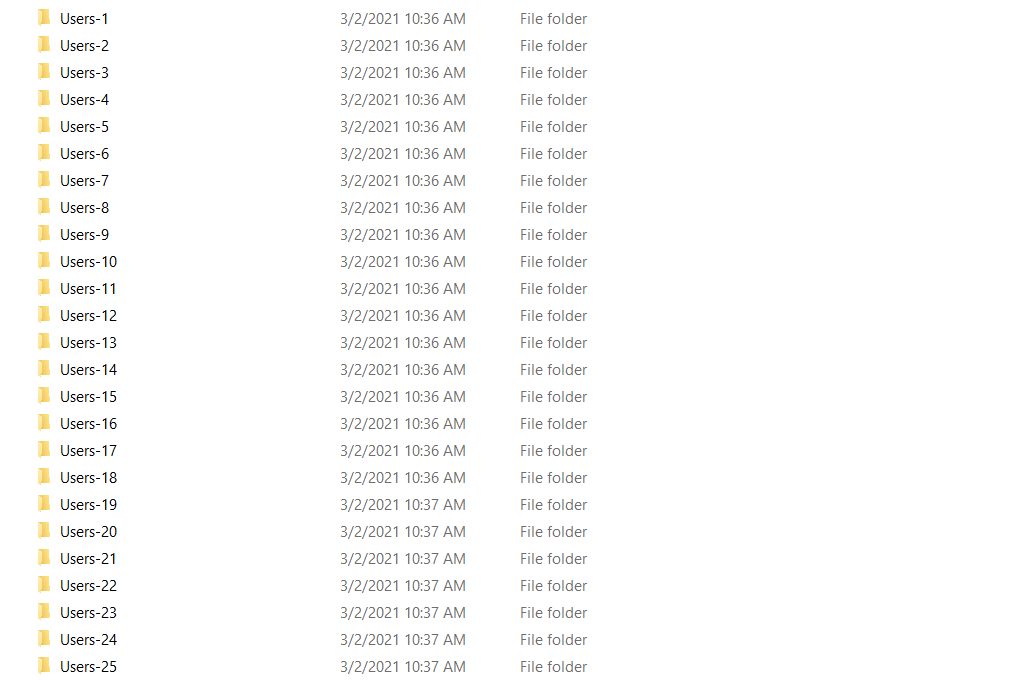 Each directory will contain 200 files, with the final directory containing the remaining files and records: 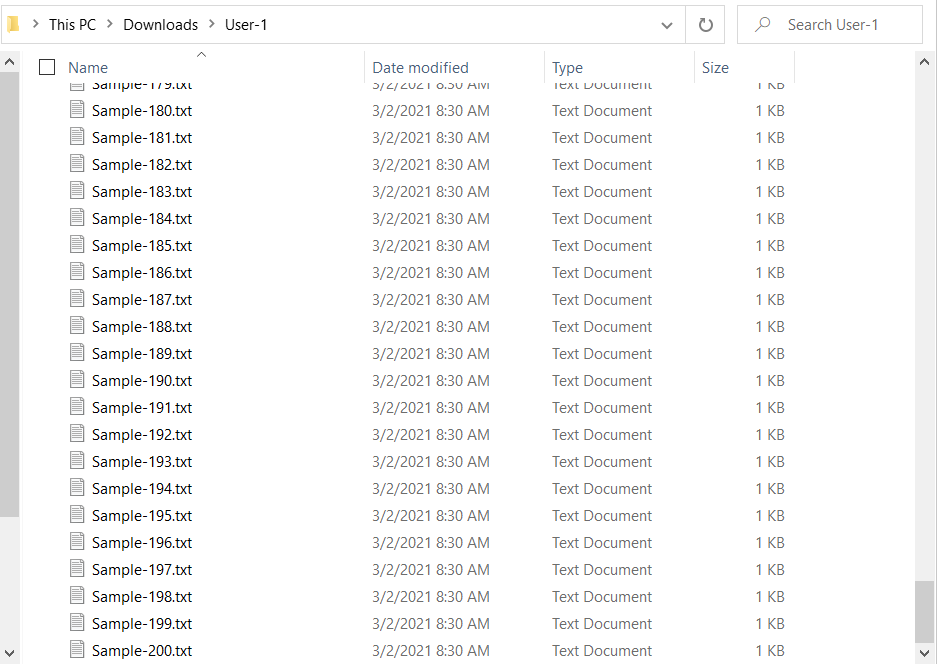 The Reference file configuration option will trigger file creation each time a "True" value is generated by the referenced Attribute. Sample-1.txt has 2 records in it.

The record that triggers file creation will be in the next file. Sample-2.txt is shown below:

The fourth record also had a "True" Boolean value and is in Sample-3.txt:

In this example, a file will be created for each generated record. The Reference option will be used in the File Config Tab to reference the firstName and lastName Attributes within a User Domain. The generated values of these Attributes will be included in the file name of each generated file. To do so, we will need to do the following:

For each output file, the file name will appear like this: lastNamefirstName.txt (e.g., StantonJane.txt).

File Creation Event ConfigurationTo ensure one file is created for each record, Constant has been selected, and "1" has been entered for the count.

The Dynamic File Name Creation Configuration references the lastName and the firstName Attributes. Since the DelimitedFileReceiver is being used for each of these examples, a constant of ".txt" has been added in the last line as the file extension. 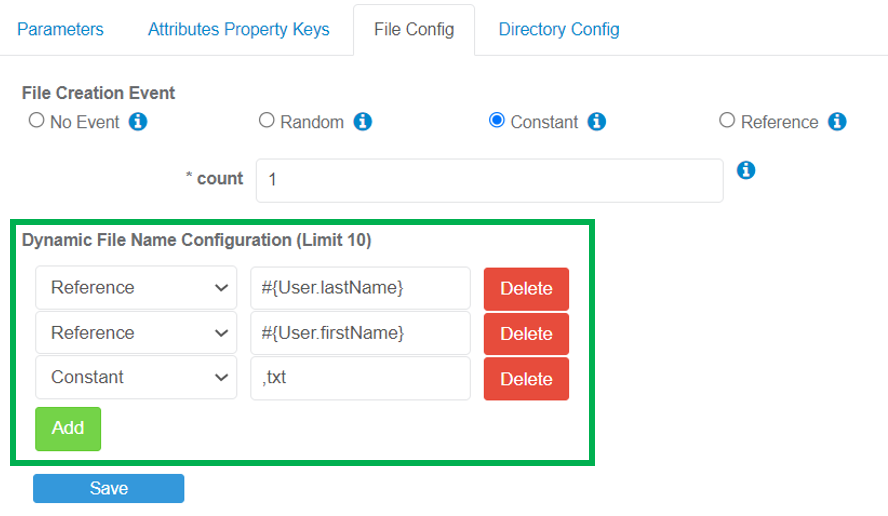 Each file name contains the user's last name and then their first name with the ".txt" extension. 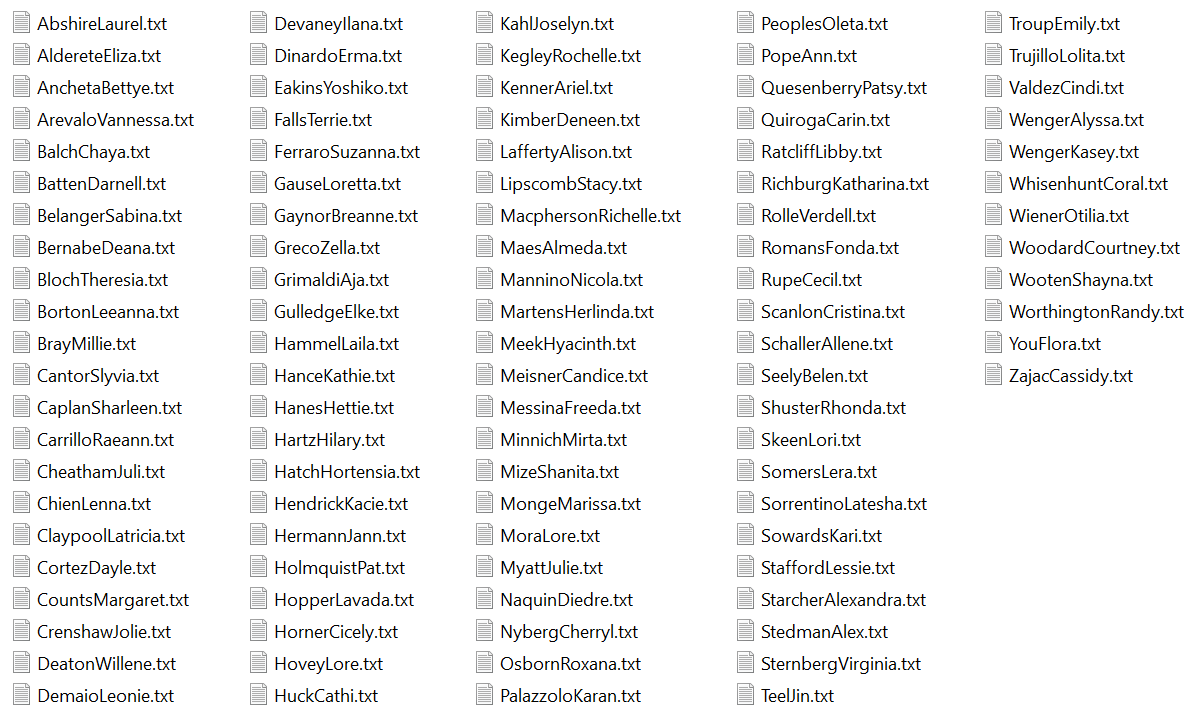 Each file contains one record. An example is shown below: