When test data is generated through the GenRocket web platform, it is based on each Domain's Attributes and their configured Generators. Sometimes logic is necessary to achieve the desired output for certain conditions.

Business logic contains the necessary conditions and actions for ensuring only users with the appropriate ages are able to participate. The following would be a simple example of two Test Data Rules and their Conditions/Actions:

Test Data Rules can be used to set up and test business logic for data generated by Domains within a Project or Project Version. Each Test Data Rule contains one or more Conditions and Actions, which are applied during data generation.

Test Data Rule Sets consist of one or more Test Data Rules, which contain business logic for defined Domains and Attributes within a selected Project or Project Version.

This logic ensures the appropriate Actions are taken when certain Conditions are met. These Actions are used to obtain the right outcome when generating test data.

A user can set up their own Test Data Rule Sets consisting of one or more Test Data Rules, which contain the logic necessary to correctly generate required test data.

The following apply to any added Test Data Rule Set:

In the visual example below, each Test Data Rule has two Conditions and one Action. Both Conditions must be met for the rule before the defined Action can be taken for the record.

Once a Test Data Rule Set has been set up, it can downloaded and ran with any Scenario or Scenario Chain within the Project. The defined Receivers will be used to generate the output data.

The following example shows a Test Data Rule Set that has been set up for a Project with 1 Domain: User.

This Domain has the following 5 Attributes: 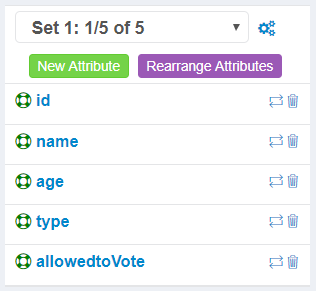 With this example, there are two Attributes that rely on the Age Attribute to generate the appropriate data: 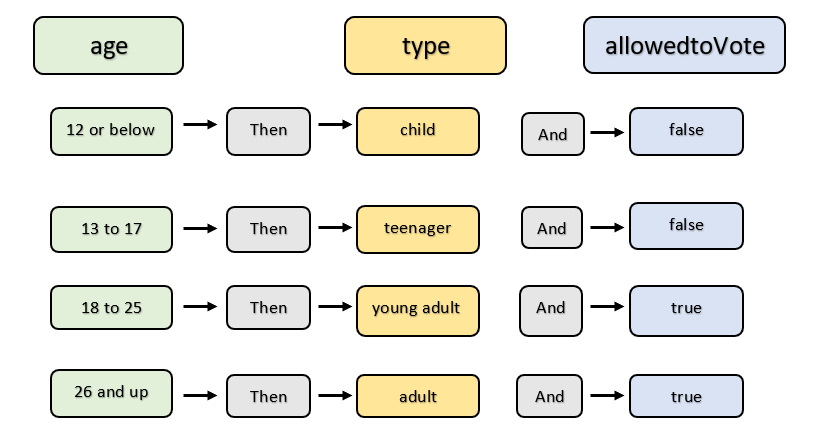 When no business logic exists for the generated data, a user may be a teenager who is 25 and allowed to vote or an adult may be 18 and not allowed to vote.

Test Data Rules will need to be defined to ensure the right user type is assigned based on age and that only the appropriate ages are given the ability to vote.

Below is a screenshot example of the entire Test Data Rule Set Each rule covers a specific set of conditions based on the user's Type and Age.

For information on how to configure and manage Test Data Rule Sets, please see the following pages: